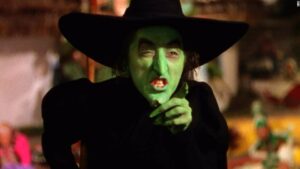 When we think of Halloween, images of pumpkins and black hats abound. The most iconic millinery item associated with Halloween is of course, the witches hat. Margaret Hamilton as the Wicked Witch of the West is obviously the most famous witch of all time. What are the origins of this hat?

The sterotypical images of a witch is that of an ugly, old hag wearing a tall, black, pointed hat with a broad rim. There are different theories as to the origin of this stereotype, none of them certain. Most likely, the hat is a fairly modern artist’s creation. In medieval woodcuts, witches are shown wearing various costumes of the times, including headscarves and hats of different fashions. Many are shown bareheaded, with locks flying in the wind.

It is possible that the witch’s hat is an exaggeration of the tall, conical “dunce’s hat” that was popular in the royal courts of the 15th century or the tall but blunt-topped hats worn by Puritans and the Welsh. No matter what the fashion, pointed hats were frowned upon by the Church, which associated points with the horns of the devil.

Brimless, conical hats have long been associated with male wizards and magicians. Goya painted witches with such hats. It is possible that an artist, somewhere along the way, added a brim to make the hats more appropriate for women. One theory holds that the steotypical witch’s hat came into being in Victorian times or around the turn of the century, in illustrations of children’s fairy tales. The tall, black, conical hat and the ugly crone became readily identifiable symbols of wickedness, to be feared by children. 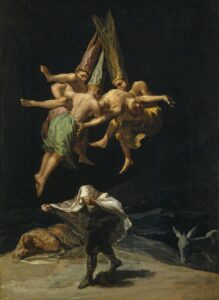 Witches in the Air is a famous painting that shows the conical witches hats.  It is eerie! These witches wear pointed hats but are unusual in most other ways. They fly but need no broomsticks, they are young and, most importantly, they are male. I don’t know where the idea of witching being a purely female pursuit came from, it is by now the common idea, but it was not accepted in Goya’s time that only girls could grow to be witches.

In the painting a few witches have flown down and have scooped a man away from his friends. One survivor is making a run for it with a sheet over his head. He has his thumbs stuck out between the index and second fingers of each hand. This gesture is called the figa and it is to ward away evil.

This painting is not only scary because it features different kinds of witches from those we are used to. It seems the victim has been picked-on at random. The picture feels like a snapshot of a crime-in-progress. The witnesses and the inclusion of a commonplace donkey make it seem like a rural scene that has gone suddenly wrong. The witches are not frail wispy things cackling in the shadows. They are painted brightly. They are healthy and in great shape. The have lifted their victim into the air, as he kicks and screams.

O.K., let’s change the tone here. We don’t want to get too scared. I’ll end with this sweet image. 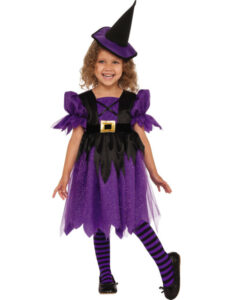