I have always loved hats.  They protect us from the elements and make a fashion statement.  There is nothing more memorable than Audrey Hepburn’s iconic black hat in “Breakfast At Tiffanys”.

I grew up in Georgetown, located in beautiful scenic Central Kentucky.  Being adventurous, I left at 18 to attend Hollins College in Roanoke, Virginia.  After graduation, I moved to New York City and began an exciting career in the music industry.  My first job was at Premier Talent Agency, where I helped coordinate concert tours for some of the industry’s biggest acts, including U2, Van Halen and Bon Jovi.  It was my dream job to say the very least! After that, I worked at Sony Music, Radio City Music Hall and EMI Records.  All very glamorous sounding but challenging in many ways.

While working in the music business, I grew to love hats more.  After a late night at a concert, often getting home past midnight, it was easy to toss on a hat, put on some bright lipstick and don a pair of huge sunglasses in my quest to get ready quickly.  Also, I am an introvert and enjoyed the protection of a hat in my quest to blend in. Of course it never really worked because my long red hair gave me away!

Little did I know it but my life was change in summer of 1993.  I was getting ready for work and a hair brush got tangled in my hair!  Not knowing what to do or where to turn (I lived alone at the time), I found an oversize purple velvet hat with black netting with stars on it.  That became my band aid to cover the 7-inch hair brush sticking out of the top of my head! When I wore that hat to work, everyone raved about it.  When my friend Suzanne suggested that I attend the FIT, I jumped at the chance!

I was fortunate to study at New York’s famed Fashion Institute of Technology, where I learned to create one of a kind hats by hand, taught by the top milliners in the world.  Others who attended F.I.T. include Michael Kors, Calvin Klein, Reem Acra, Eric Javits and Carolina Herrera.   I soon fell head over heels in love with hat design and would stay up making hats in the wee hours of the morning in my 5th floor apartment on the Upper East Side with my black cat Jimi.  After receiving my certificate in Millinery Design, I interned for famed milliner Patricia Underwood.

Fast forward ten years later and a move back to Kentucky, I started my internet- based company – Polly Singer Couture Hats and Veils – in 2003. My design style is often characterized as a mix of Bluegrass tradition and New York elegance. Having always been a fan of Audrey Hepburn’s classic elegance, I find this style works best on most people and is timeless.

Working by hand, using only the finest materials, I regard each hat as an individual work of art.  I work with clients all over the world for many events, such as weddings, galas, races and casual wear.  When working personally with a client, it usually takes about 30 minutes to help them chose the best style for them as well as customizing the hat to complement their outfit.  Personalizing hats and fascinators for my clients is immensely satisfying when I see the huge smile on their faces.  It makes all the hard work worthwhile! 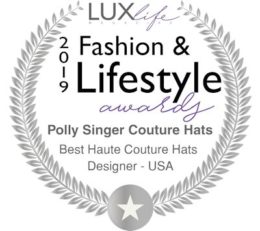 In 2019, I was fortunate to be recognized by Luxe Magazine in England as the Best Haute Couture Hat Designer in the United States! It was quite an honor.  Over the years, my business has been recognized for achievements in the field of hat design.  My hat Matisse won “Best of Show” at the TLD Design Center in Westmont, Illinois.  Another hat, Go For The Green, won the “Hats Off To Keeneland” award. In addition, my creations have been shown at numerous venues across the United States including Louisville’s KMAC Museum and the New York’s American Craft Museum.

Most importantly, my hats have raised thousands of dollars for charities.  One of my custom designs raised $5,000 for Angel Heart Farm, an equine therapy program for children battling chronic and life threatening issues. 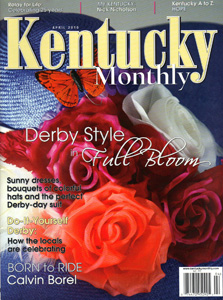 My business has been featured in the national press.  Articles about my hats have appeared in The Wall Street Journal, Forbes, Town and Country, People, USA Today, Victoria, Southern Lady, Tea Time and Kentucky Monthly.  My creations have appeared on ABC’s The View and Extreme Makeover Home Edition.  My designs often end up in the Winner’s Circle at the Kentucky Derby.

Over the years, my hats have been featured at the Keeneland Race Track, Talbots, A.J.’s Casuals, Monkees and Sassanova.

When not making hats, I enjoy travel.  I love a good mystery and compelling fiction.  Always a fan of British costume dramas, I can never get enough of “The Crown”, “Victorian and Albert” and of course, “Downton Abbey”.  My friends and I have a historical tea group, which has been so much over the years.  We have hosted Victorian, Steampunk, Edwardian, Regency and of course, Royal Wedding theme teas.

Please note that Polly Singer Couture Hats and Veils is not affiliated with Churchill Downs or the Kentucky Derby.